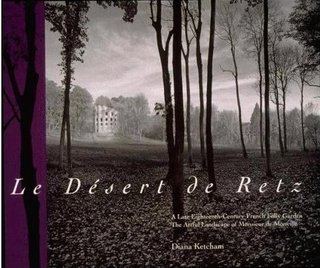 The Désert de Retz, the supreme surviving example of the folly garden, is one of the most amply and beautifully documented of France's historic gardens. Since 1990, when the Arion Press published the first book on this garden outside of Paris, the Désert de Retz has been transformed by an ongoing restoration. That limited, fine-press edition is long out of print and much sought after. This new edition reproduces in a smaller oblong format the material in the original book. Diana Ketcham's text has been expanded and updated to reflect recent scholarship and physical changes to the site. There are also new photographs that show the restored landscape and the complete restoration of the folly known as the Broken Column to its original state as a false ruin.

Arthur C. Danto, art critic of The Nation, wrote about this book:

"Diana Ketcham’s magnificently researched and beautifully accomplished text, with its accompanying images, is not a book for mere specialists. It is a book of interest to garden enthusiasts, to art historians, to surrealists--to anyone with a taste for fantasy, architectural metaphor, the poetry of vision, the aesthetics of stone and leaf.”

Demographic shifts. Climate change. The internet. "Sea Ranch is changing, like our society," said the architect Mary Griffin. "We simply can't build the way we did even 20 years ago."

The de Young in the 21st Century: A Museum by Herzog & de Meuron Thames & Hudson 2005
The design process of architects Herzog and de Meuron for their award winning de Young Museum. “A fine book about design” --Robert Campbell, Boston Globe